The Soave production zone is located in the eastern part of the hills in the province of Verona (north of the "Serenissima" highway, between the 18th and 25th kilometres of the Verona-Venezia road). 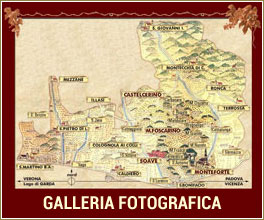 Garganega is the designation’s principal grape variety, and over the centuries it has found an ideal habitat here in the contours of the Alpone, Tramigna, Illasi and Mezzane valleys.

The use of the specification “Classico” with the designation “Soave” is reserved for the product made from grapes harvested and vinified in the municipalities of Soave and Monteforte d’Alpone, ie. the oldest, original “classic” zone.

Click on the above map for a bigger detail and to gain access to some pictures showing the area.

History and locations in Soave

The evidence of viticulture in the Soave area is very ancient and this wine has had great fame dating back to remote history. Viticulture and wine production probably began by following the example of the Etruscans, Venetians and Celts.
When the Romans came to settle in Verona, the DOC area of Soave expanded with more cultivated land and production. The cellars were supposed to put a fine RAETIC WINE on the market.

For the sale that followed, it was transported using carts, in amphoras or barrels, to the warehouses of the Veronese river port behind Santa Anastasia or to storage locations in the Campon area.

Here, they were loaded on river barges going to the Mediterranean area, or better yet, up to the imperial lands along the Rhine and the Danube. Even monks became winemakers, tilling the land and promoting the dissemination of the grapevine.

It was only after the decline of the Barbaric age which, in part, caused viticulture to be abandoned around the year 1000, that these areas slowly resumed life, defending themselves with castles from the last Hungarian invasions. Ruins and intact castles now formed a significant part of the landscape. 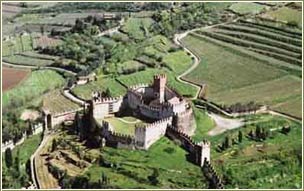 The Soave castle: From Montorio to Illasi, from Soave to Monteforte d'Alpone, myriads of fortresses dotted the hills. The Guelphs and Ghibellines, Monticoli and Sanbonifacio, Scaligeri, Visconti, Carresi and Serenissimi Venetians met and clashed frequently in these parts. Then came the time of country villas.

Villages, castles, villas and palaces were harmoniously inserted in the region. Viticulture had its share of problems. Besides human factors such as excessive production and technological deficiency, even the inclemency of nature with the scourge of powdery mildew and the appearance of other insects that damaged the vine contributed negatively. The appearance of a "wine company" was followed by a more substantial movement to industrialise agriculture and promote it with irrigation canals and even land reclamation. Veronese wine production took off towards the end of the nineteenth century. New production techniques and a continuous search for quality improvement were and still are the foundation of this wine's success. In the twentieth century, exhibitions, shows and events made this pleasant and refined product known to the whole world.

Soave can be considered the Italian white wine par excellence. It is not just for the Garganega and Trebbiano grapes with which it is produced, well-known grape varieties which are indigenous - at least from a certain time onwards - but also in terms of character that separates itself from the international style of Chardonnay or Sauvignon. It has a different kind of richness, more integral and complex. 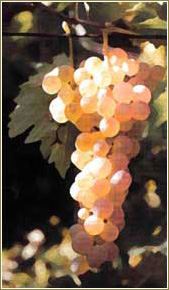 Garganega grapes to maturation: The hills of the Classica area between Soave and Monteforte and the best positions of the extended area offer a spectrum of truly different and interesting terrain. If the soil, whether volcanic or chalky, tuffaceous or clayey, has a low quantity of nitrogenous substances and a high quantity of micro-elements, the Garganega grape can demonstrate its full value. This vine variety, whose productive force and momentum must be checked rigorously, produces a white wine with a collected and non-aromatic scent; its characteristic scents of almond and certain white flowers express themselves gradually, the white grape is thin, such that when it is more clear and voluptuous, the presence of Chardonnay is evident, which guidelines permit up to 30% in the blend.

This lack of aromaticity of Garganega and Trebbiano, is, for some manufacturers, an opportunity, a challenge because the scents of Soave can become clear and intriguing, provided that they maintain a depth and persistence worthy of a great wine, and we can say this in absolute terms. The primary delicate sensations interact with certain secondary scents, so as to cause a real emancipation of the latter. From the standpoint of taste, the vital flavour of Trebbiano can be a perfect support for the meaningful density of Garganega: the Soave thus turns out to be rich and at the same time enjoyable, a perfect white wine to accompany fish with its decisive and essential energy. A few different interpretations, supported by the presence of Chardonnay or from different systems of maceration and fermentation of the skin, produces a richer and more enveloping taste so that the Soave can age well in wood and also represents an option to pair with white meat dishes and, in some cases, with sharp cheeses.

GARGANEGA. It is the main vine variety of the denomination. Over the centuries, it has found an ideal habitat especially in the hills that characterise the valleys of Alpone, Tramigna, Illasi and Mezzane. This ideal symbiosis of environments can be produced only in these hills with volcanic tuffaceous soil and significant chalky outcrops.

Garganega does not have a strong aroma but rather, a small endowment of fragrances of which almond and white flowers are the sharpest. It has a very long biological development and reaches maturity in October. It has a tough and particularly yellow (almost red) skin when it ripens. It is not overwhelmingly sour but features a rather interesting balance of extracts and sugar.

TREBBIANO DI SOAVE. Family of white grape vine variety among the most common in Italy, present in dozens of DOC wine blends, both white and red.

There are 6 different DOC wines (Trebbiano Val Trebbia dei Colli Piacentini, Trebbiano di Aprilia, Trebbiano di Arborea, Trebbiano di Capriano del Colle, Trebbiano d'Abruzzo, Trebbiano di Romagna). Its extensive dissemination is due to its ability to adapt to different types of terrain and weather conditions, high productivity and characteristics of the resulting wine. It is generally pleasant and clean and easily marketable, as it is neutral enough to be used in conjunction with other wines with more distinct personalities without being overwhelming even when used in high percentages.

Shoots with a fluffy, green-white expanded apex with a hint of pink, and bent whitish-green apex leaves with yellow-pink hues.

CHARDONNAY. White grape vine variety very common in France where it is the main component of the blend of some of the most prestigious wines in the world such as Champagne, Chablis, Corton-Charlemagne, Meursault, Montrachet, Pouilly-Fuiss.

From France, it has spread to all areas where there is the will to produce wines of great value such as California, South Africa, New Zealand, Australia. In Italy, it is particularly prevalent in areas with a vocation for sparkling wine such as Trentino, Alto Adige and Franciacorta.

There are 4 Italian DOC Chardonnays (Chardonnay Alto Adige, Chardonnay Grave del Friuli, Chardonnay Lison-Pramaggiore and Chardonnay Trentino), but plants of this vine variety are spreading to every region, producing high-quality wines appreciated all over the world, but classified by law as "table wine".

PINOT BIANCO. Family of white and red grape vine varieties, very common in France where they represent the main component of the blend of some of the most prestigious wines of the world such as Champagne (Pinot Noir and Pinot Meunier), and Burgundy (Chambertin, Musigny and Romanée-Conti are produced from Pinot Noir grapes).

In Italy, they are particularly prevalent in areas with a vocation for sparkling wine such as Oltrepo Pavese, Trentino, South Tyrol and Franciacorta.

There are as many as 40 Italian DOC Pinots, in their "white", "grey" and "black" varieties, but plants of this vine variety are spreading to every region, producing wines of great quality and success, but classified by law as "table wine".

"Vinum suave, nobile et pretiosum"; this is whaat the ancient Romans called this wine, described as early as 533 D.C. by the imperial official of King Theodoric, Cassiodorus. Its processing requires special care and attention.

Recioto is obtained from the Garganega grape that has a loose bunch with sparse grapes that are not too big and have compact skin. The grapes, even if ripe, are collected when the grapes are still very firm, dry and intact. 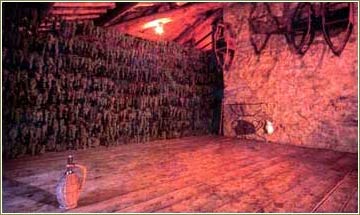 Subsequently, before being pressed, they are placed on pylons or wooden plateaus positioned in well-ventilated areas where they are left to wither in order to concentrate the sugars they contain.

This process, called withering or overripening, not only results in dehydration due to evaporation of the water contained in the grapes but also in the metabolization of the sugars, an increase in fructose and polyphenolic substances, which recent studies have shown to be quite beneficial for health. Withering, depending on the year, can be extended up to March, but normally pressing is planned for Christmas.

The must obtained, (with a final yield of less than 10% of the grapes harvested in the vineyard), has the scent of ripe fruit with a full and markedly sweet flavour and the alcohol content, when bottled, ranges from 13 to 15 percent. 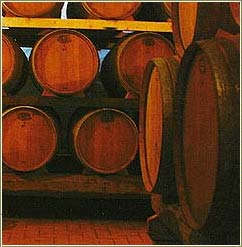 The grape pomace remains in contact with the must for a period ranging from a few hours to a few days. The wine is aged in Barriquess: special 225-litre barrels made of oak wood from forests in central France. The wood confers the effect of its many aromatic compounds with organoleptic characteristics ranging from toasted almonds to vanilla to mouldy hay.

This wine owes its name to the particular shape of the Garganega bunches, which have an upper winged part shaped like an ear. In the Veneto dialect, they are in fact called ‘rece’ (meaning ear) from which Recioto is derived.

Particularly for some of the wines offered by ViniSoave.it in the dessert wine category, withering is prolonged and only grapes affected by Botrytis cinerea are used, otherwise called noble rot, which is wonderfully beneficial for wine.

Leaving it in the barrel for three years adds much more to it than some noble Sauternes label.

at the moment it is not possible to ship orders outside UE, UK or US because we are reorganizing our business.

We will back soon!