History and locations of Bardolino 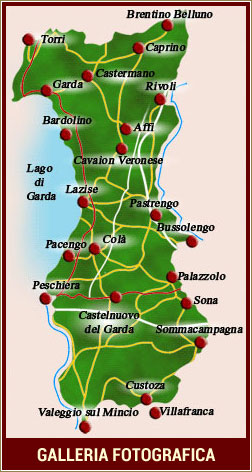 The Bardolino grapevine is reflected on the Garda lake, a pre-Alpine environment that has the colours and scents of the Mediterranean. The mild climate, exposure to the sun, the balanced rainfall and temperature, the variety of soils (sandy, gravelly, clayey), the passion and the skill of the producers, make Bardolino wine particularly pleasant and appreciated in the international arena. Due to its mild climate and the beauty of its hills, Bardolino was always fought over by powerful feudal lords and noble families. It was inhabited in prehistoric times by a pile-dwelling settlement, but only became a real inhabited area in Roman times. The Romans settled in its territory, building villas and other buildings. During the Middle Ages, the town became a free municipality. It was fortified during the Barbaric invasions, while the Scaligeri are credited with the reconstruction of the castle. It was ruled by Venice and became part of the Italian territory in 1866. It was briefly an independent municipality with a Statute in the twelfth century, sold to the City of Verona in 1193 and has experienced historical events up to the present day.

The town has an important and rare example of Carolingian architecture: San Zeno church, dating back to the ninth century. St. Peter's church is also interesting for visitors, with frescoes from the thirteenth century, as well as St. George's church, hermitage of Camaldolese fathers, built between 1663 and 1673. In Bardolino, Palazzo Firmo from the Renaissance period is also noteworthy, as are the Canestrari and Bottagisio villas. Its typical historical centre is enclosed by the remains of Scaligeri walls with mighty towers, ancient churches, parks and Venetian villas.

Bardolino is also famous for its ruby red wine or rosé wine in the Chiaretto version, the famous Bardolino where the grape festival is celebrated every year in October.

In the production area of Bardolino wine, the vine has been cultivated since the Bronze Age, as demonstrated by certain seeds found in the pile-dwellings of Peschiera, Lazise, Cisano and Pacengo. The name, certainly of Germanic origin, could be derived, as legend has it, from Bardali, King Axuleto's daughter and granddaughter of Manto, founder of Mantua, and sung of by the Latin poet Virgil and by Dante Alighieri in the Divine Comedy. During the medieval period, the production of Bardolino was continued by the monks of St. Columbano Church, who rescued this wine after its disappearance.

Until 1800, to produce Bardolino, the custom was to ferment the must in some cavities in impermeable areas of the terrain covered with stone slabs.

On April 3, 1926, the first Consortium for the protection of the typical Bardolino wine was implemented. The activity of this Consortium, based on a flawed decree of the law from 1924, was somewhat limited because this law did not make membership in the Consortium compulsory for the producers and did not establish any sanctions for those incurring violations with regard to the protected wine.

In 1937, following a law that amended the Decree, Veronese manufacturers implemented a single Consortium for the protection of fine wines from Verona, whose production area limits underwent a careful and thorough study in 1939.

Characteristics and vine varieties of Bardolino

The soil of the morainic hills in the Gardesano-Veronese area, of Bardolino DOC and DOCG wine, has a particular vine characteristic 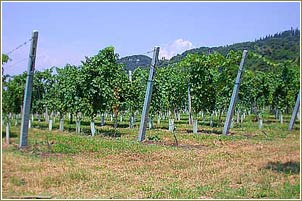 The mild climate, with mild winters and temperate summers, is a decisive factor in the positive characterisation of the grapes and the resulting wine.

The Denomination of Controlled and Guaranteed Origin "Bardolino Superiore" also with the "Classico" label, is made from Corvina Veronese grapes (Cruina or Corvina) 35-65%, (a maximum of 10% of Corvinone is allowed to replace an equal percentage of Corvina, provided that the Corvinone came from soil rich in rock fragments), 10-40% Rondinella, Molinara, Rossignola (Rossetta), Barbera, Sangiovese, Marzemino, Merlot, Cabernet Sauvignon by themselves or in combination for a maximum of 20% with a maximum of 10% for each variety. The minimum number of plants per hectare is 3,300.

The maximum production of grapes should not be higher than 9 tonnes per hectare of specialised vine cultivation, with a maximum production of wine from grapes of 70%. The grapes for wine-making must guarantee the wine a denomination of controlled and guaranteed origin "Bardolino Superiore", a minimum overall alcohol content of 11.5% by volume and have an ageing period of at least 1 year, starting from November 1 of the production year. 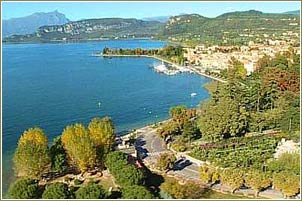 The vinification and ageing operations of products to be given the additional specification "Classico" must be carried out within the defined area. "Bardolino Chiaretto" is obtained by the "pink" vinification of the grapes (with minimal maceration of the skin); a rosé wine is obtained with a fruity aroma and fresh and easy taste, sometimes nicely sharp, extraordinary in the warm season with fish and shellfish. It is probably the most produced Italian rosé wine. The Chiaretto is also made sparkling, mostly using the Charmat method, but some also use the prestigious Classico method. Wines with denomination of controlled and guaranteed origin "Bardolino Superiore", at the time of consumption, must meet the following characteristics: light ruby red colour, sometimes cherry red, tending towards garnet with ageing towards pink for the Chiaretto type; distinctive and delicate vinous smell; dry, savoury and balanced flavour with a slightly bitter finish. The Bardolino is paired with broths and soups like "scaligera" (a turkey and chicken soup), tagliatelle or first courses of risotto with mushrooms, liver or peas. Excellent if paired with glazed veal served with mushrooms or white meat dishes. Easy to drink, it is considered to be the quintessential wine to accompany you "throughout the meal".

CORVINA VERONESE. When your respect for the peculiarities of the place and its vineyards is greater than the apprehension you might feel for the trend of the market, Valpolicella wines show a peculiar feature that strikes the eye, or rather the nose and taste, from the very first sip: an unmistakable note of cherry, more or less marked, which often merges with that of the almond.

It is mainly the Corvina that gives this refined touch, the "queen of Veronese grapes", as some authors have defined it. A robust vine, maybe even too abundant and quite resistant to the winter cold, it blooms in late April and ripens between September and October. It is recognised by experts for its excellent wine quality. However, the farmer's patience and the ability are put to the test to demonstrate this: in spite of its fame, it is indeed a difficult grape, sensitive to cryptogamic diseases such as peronospora, sour skin and botrytis, demanding in terms of climate (negatively affected by humidity) and land. The preferred terrain is stony and alluvial or hilly and well-ventilated.

Over the years, to try to overcome some problems and enhance its best features, certain varieties have been selected for cloning which, depending on the types of vine chosen (medium Corvina, Cruina or large Corvina), can be more or less robust, with larger or smaller bunches, rich in sugar and especially resistant to certain diseases. If vinified alone, Corvina produces a wine of an intense ruby red colour with violet hues and a fresh scent, quite a full-bodied flavour and a slightly tannic vinegary taste.

MOLINARA. What once gave durability to Valpolicella was particularly Molinara grapes, so named for the abundant bloom that makes the bunches full of grapes, so as to make them look dusted with flour. It is a robust vine with abundant and constant production, rarely attacked by botrytis and sour skin.

On the other hand, it is not resistant to the cold and requires dry, sunny and breezy hillside terrain. The wine produced purely from this grape is pale pink, quite sour and alcoholic at the same time.

RONDINELLA. Rondinella is also a native vine, but unlike the previous one, it is better suited to difficult environments and climates. The wine produced is less robust than that from Corvina, with a less intense ruby colour, a floral, slightly vinous aroma and a dry taste. As a plant, it shows excellent resistance to botrytis, the cold and attacks by many cryptogamic diseases and harmful insects such as mites, leafhoppers, and moths. It is not affected by the dry season and grows well on all types of terrain.

IL CORVINONE. This traditional trio of vines has always been accompanied by a fourth grape, the Corvinone, although in an almost 'underground' way, i.e. never officially declared. It has long been considered yet another variety of the Corvina grape rather than a stand-alone vine. For this reason, its inclusion in the official Register of vines is a recent phenomenon.

In fact, the Corvinone has become more recognised and popular in the last few years, such that many producers believe that its organoleptic qualities are superior even to those of Corvina, while presenting the same problems as the latter.

Corvinone, in fact, is hyperproductive when grown in the plains or in the lower parts of the valleys and, while resisting the cold well, the rather large and thick-skinned grapes are easily attacked by botrytis, even if they seem ideal for withering. The best results are, therefore, obtained from the vineyards of Corvinone, planted in the more hilly and less fertile areas, that are well-ventilated and have good sunshine.

OTHER INDIGENOUS GRAPES OF INTEREST. Among other grape varieties used in the production of Bardolino we cite the Rossignola, which is a late grape; it blooms in April but ripens only towards the middle of October.

It is a late variety in terms of budding and maturation; very robust, with very fertile buds.

It is partial to expanded vineyards with long and abundant pruning.

Resistant to cold and drought but sensitive to disease. The wine made from it has a fresh taste, good acidity and has a cherry red colour. 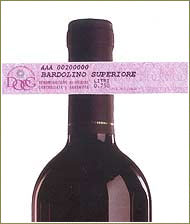 Bardolino DOCG. By the decree dated August 1, 2001, the Designation of Controlled and Guaranteed Origin was assigned to the "Bardolino Superiore" wine.

It is an important recognition for one of the most well-known and highly regarded wines of Verona, the first ever Venetian red wine to achieve this important milestone, thus rewarding the originality and productive of the Garda area and its hinterland.

Behind the ancient viticultural vocation of this area, there are controls and the suggestions of the Consortium and the seriousness of companies operating with care and rigour in the vineyard and at the winery, with a careful choice of local varieties and wine research aimed at preserving and re-evaluating the potential of grapes to be transformed into the best wine.

The result of the happy combination of these elements is an important wine, capable of meeting consumer expectations with its inimitable colour, aroma and taste, enhanced by the culture of the Lake Garda landscape. 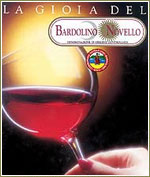 Novello. Bardolino bottled by December 31 of the production year of the grapes with the characteristics provided by the guidelines can be designated "Novello", the first in Italy of its kind that obtained the DOC.

The grapes from which it is obtained must be 100% processed with carbonic maceration.

The resulting wine has an elegant and lively medium intense ruby colour, a distinctly fruity, fragrant smell, reminiscent of raspberry, strawberry and cherry.

The taste, gently smooth, is fresh and fruity, balanced, appetising and very pleasant. For these specific qualities, it is considered to be one of most prestigious and representative "novellos" of Italian oenology. 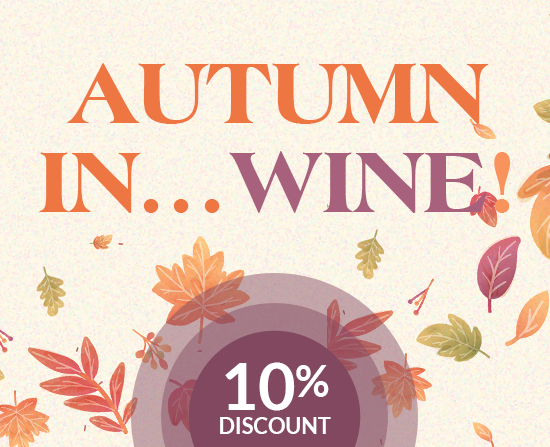 Register and receive the discount code via email!